(Boldly doing one, because no man/one has ever done one before, honest)


Scene: Kirk is on the bridge, fiddling with something. Picard appears in a convincing shower of industrial-light-and-magic style sparks

Picard: What are you doing?

Kirk: I'm trying to repair my uniform. Look : I've torn it from my left nipple to my right shoulder, and I have a red line on my chest to prove it.

Picard: What caused that?

Kirk: Yeoman Randy. She raped me.

Picard: So it's lipstick, then?

Kirk: What? I didn't know she wore lipstick all the way down there. Anyway, Pican, how did you get here?

Kirk: Oh, well maybe you can materialize my uniform. It's getting bloody chilly, and I can't get my singer going.

Picard: Is it a stitchamatic?

Kirk: No, it's Charles Aznevour.

Kirk: So, I'm relieved! An amusing pay-off at last.

Picard: Not half as relieved as I am.

(the intercom bursts into sudden and unlikely life)

Scotty (over intercom): Och eye the noo, cap'n. We have a problem.

Scotty: Well, you remember that problem we had with the clit-women of Bonkus IV?

Kirk: It was nothing that Radion Ultra wouldn't get out...

Scotty: Well, I have another completely different but strangely-similar-in-many-respects Captain Kirk doon here who claims to be you. He looks like you, sounds like you and even acts as badly (sorry, I meant to say 'as stylishly') as you.

Kirk: Did you get Spock to sniff his genitals?

Scotty: Aye, sir. He said he smelt like you, as well.

Kirk: Damn. Scotty, get to sickbay; we'll be down shortly.

(So the two captains gallantly get into the lift and say "Sickbay". Later, in sickbay...)

Kirk 1 (convincingly): So this is the other Kirk.

Kirk 2 (equally convincingly) : So this is the other Kirk.

Kirk 1: McCoy, can you come up with a way of telling us apart?

McCoy: Well, I don't know, Jim. You are both similar in every way. Both of you are too old to do the job convincingly, neither of you have any hair...

Picard: It's a good job I can act, or there may well have been three suspect Kirks down here...

Scotty: Jings crivens, helpmaboab. I think I have an idea.

(Scotty pulls a two-foot metal pole out of his pants, to much ooh-ing and aah-ing of the rest of the engineering staff and a round of spontaneous applause from the ship's eunuchs)

Scotty: Why not use this analon probe to do a kidney-count? The real Kirk, as we all know, has an extra kidney, gained from eating a dodgy pie on Klimax-IV.

Kirk: Good idea. Stick the beam up me, Scotty.

(and the problem solved, the spare Kirk is locked in the brig with a spare Yeoman Rand who was easily detected because she had twenty three tits)

Kirk: Now, Picard, what the devil are you doing on my ship?

Picard: Well, it goes like this: The Enterprise D found itself caught up in a coherent exploitation field which means we are both in the same story in order to save the authors having to write two different Star Trek Stories. Now, for the purposes of tale advancement, I suggest we beam aboard the Enterprise. That's the Enterprise D, of course, I mean, we could hardly beam aboard this Enterprise when we are already here, could we? Whaddayasay, Kirkybaby?

Kirk: I see. I'll do it, but it will cost you 25 million in adjusted US dollars.

(They then board the Enterprise).

Riker: Welcome, captain Picard and Kirkybaby. In honour of your visit we have decided to hold a Kirk-Boarding party, when we all dress up as the pirates of Penzance and Picard does his song in the style of Patto. Take it away, Picard; I love you:

Picard (donning his best uniform): Well, you're certainly my number one, number one. Ah one- ah two- ah one two three-


(crew-members start dancing around, donning parrots on their shoulders)


(original tune, fluffy animals flying around)(Some of the higher ranks are wearing bowls of fruit on their heads)


Kirk: Now, Picard, use your best Shakespearean voice to take us down to engineering for some more jokes with Cockney La Forge and Chief Engineer Tonto.

Tonto: Over there - (stands up and points to the warp engine).

La Forge: Cor, you could tell all of that from just listening to the deck?

Not Really Worf (demanding attention): Look everyone - It's Worf! I'm over Here! It's really me! I have a big cornish pasty on my head and everything! Heeeeeerrrees...Worfy! Err...

Cockney: Sorry, me old mucker. Klingon. You look terrible (even if I'm as blind as an 'apples and ugly twat').

Picard: This man is obviously an impostor. He must be Chinese. Lieutenant, you know what we do with Chinese around here : take him away. And don't forget to wrap him up in shiny stuff and put him in the oven.

Everyone: Yes, it's three years in stir-fry for you.

(Then, as usual, the entire ship is rocked by an explosion)

Captain: Been on the curry again, Riker?

Kirk: It's not that! The ship is under attack.

Cockney: Well, guv it don't look good. Direct hit. The galley has been hit. The plates are all smashed. Lucky for us though, the saucer section is undamaged and my name is Toby.

(The bridge. About twenty officers pile out of the turbo-lift. Some of them are from the films and so are very fat, causing the turbo lift to rise another three feet after they have left it).

Wesley: Well, Captain, me and some of the other ensigns have been having an argument about who has the cutest bum in Starfleet.  I think mine is cutest but he says he used to know this guy back in San Francisco (they invented it there you know).  Anyway rumour had it that this guy could charm a blind cow with his chocolate sphincter without use of a diagram and a box of grass-flavoured chocolates from almost three fields away.  Oh, and by the way we have a deadly enemy ship hailing us.

Picard: Put it on screen... Hmm, yes it certainly is very cute indeed. Now put the message on screen.

Wesley: (Putting them back on) Yes, Captain.

(Picard looks at the screen)

Picard: Whoever is that?

Data: It appears to be the floating head of Nana Mouskouri, leader of the planet whose entire social structure is based on TV transmissions from the Comedy Channel from the period of Earth known as the Late Sixties.

Data: Yes, it was pre-Mork and Mindy and consisted mainly of repeats of old movies. 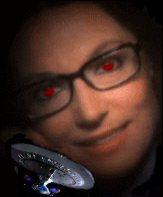 Nana: Alien ship, I greet thee just before grinding you to dust.

Riker: Now, for someone who comes from a planet of comedy she isn't very funny.

Data: Maybe she does not have a sense of houmous.

Picard: What is the meaning of this attack, floating head?