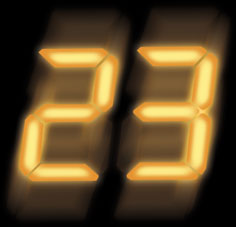 The following takes place between dinner time and happy hour.

Palmer: Jack they've stole over 50% of the internet, why did nobody stop them?

Palmer: Yes that's when we noticed!

Bauer: (aside) Hmm, they don't call him Palmer for nothing.

Tony: You think the Muslims are behind this? How do you know?

Bauer: Because it always them, that's how. This is just their style.

Tony: That doesn't make sense. They have no 'style'

Bauer: And that's how I know it is them. Look, let me explain. The people who did this are probably geeks, right? Everyone who's watched the way 'The Lone Gunmen' dress knows that geeks have no style. Therefore – it's the muslims. Simple really. Let me get my gun – I'm off in my Nissan Shift (which, I should add, balances economy and performance and is perfect for protectors of the American way). You log into your Dell Pressario desktop, open a some sockets using your Cisco modem and try to find the internet from here. And if you see any muslims around here then shoot 'em - including Jitendra from Accounts - he looked at me funny when I handed in my last expenses claim.

Palmer: Where are you going?

Bauer: I'm not sure yet – I'm just going to drive around until someone tries to run me off the road and then torture me. But I'm ready for them this time – I've had some non-conductive nipple rings put in and they will make even twenty thousand volts feel good. Meanwhile, in a secret bunker somewhere, a meeting is taking place between 8 of the biggest evil masterminds in the world.

Cat Stevens: I would like to bring to order this the nine hundred and eighteenth meeting of our shadowy organisation as yet unnamed. This is the first ‘in-person’ meeting of our group, mainly because we stole internet conferencing this morning and we haven’t been able to get it back out of the toilet yet. I think we shall forgo the apologies and matters arising and go straight to Item 3 on the agenda – a name for our organisation. Your thoughts Gentlemen and ladies. Or else I’ll keep on singing “Morning has Broken” over and over again until the matter is resolved.

Lars Ulrich: I must say that in my capacity as a tennis dude and drummer, I’m going for “Total Warfare Against TCPIP Sockets”

Tuttle: I have twenty two years experience in coming up with names for things, and I have to go with “Super-Highway Infrastructure Terrorists.”

Cherie Palmer: Let’s go with “Internet Destruction In Our Time.”

Cat: That isn’t a name for an organisation. Peter.

Peter: Ok, I’d go for the “Counter-Internet Association”. Now put that guitar down before I smack you with it.

Cat: I can see this is going to be a very long meeting indeed… Meanwhile, back at CTU, everyone is rushing back from the toilet.

Chloe: Because I’m cleverer that the rest of you, I’ve got a lead on the missing internet. I was looking at personalitydisorder.com when it was stolen so I followed it by tracking it’s redirected packets.

Tony: Good work Chloe, where was it taken?

Chloe: They’re keeping it in an internet hole. Oh, no! I think it’s maybe the one in our car park!

Palmer: What! But Jack’s down there. Somebody’s got to warn him, before those sick puppies pop a cap in his ass.

Cut to darkened room full of cars somewhere below the CTU offices.

Shadowy figure: It rubs the lotion on its sockets else it gets the DDOS attack again. What’s that my pretty? You will make me rich quick, get me a university degree and supply all my pharmaceutical needs if I let you go? I think not. And don’t think anyone here can save you – The fools at CTU would never think of looking under their very noses. But soft, what is that noise I hear? Is it someone bringing me something nice, or just another operative on his way home? Wait here, I’ll be back with the bullet-ridden head of whoever it is in a bit.

The shadowy figure is behind Jack now with a gun aimed at his head. He is about to stroke Jack’s hair in a really strange way.

Jack: Wait – don't shoot - how can I prove America is super-duper if you shoot me without any ideological babble?

The makers of 23 would like to point out that no muslims were harmed during the making of this series - Jitendra from Accounts was indeed fictional. You don't really think CTU would hire any muslims, do you?