A special report by our man on the green, Richard Honeyhansenha.

Golfness. That shocking term which was once an insult used by little kids against other little kids, is now embraced by the world's golfing community. But what makes someone 'play golf'? What makes another man pour boiling acid on someone who they suspect of being a bit golfy? Why is golf illegal in the military, resulting in loss of fag privileges and many weeks of detention in a vat of wet straw sprinkled with sultanas? Even though the European Court of Yeoman Rands have many outstanding cases regarding the British government's stance of Golf (which those garlictoads refer to as 'an innocent pastime'), why does our government still allow people to play football legally from the age of 3, whilst Golf is the prerogative of only rich drug barons or children of 18? What is the church's beef on playing on the clay end?

These questions are really really important because kids can catch golf from strange adults. Or did it? 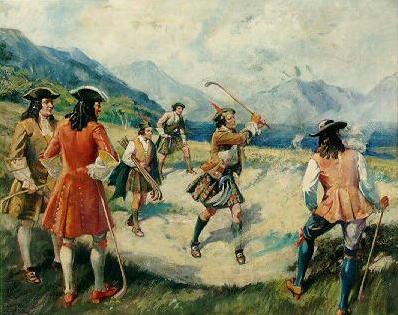 A group of golfers in Disgusting Fancy Dress Frolicks

First, before we tell you what conclusion you should draw, the history of Golfness.

Golf was invented by playwright Oscar Wilde, only he excused it by being really really clever with words. Queen Victoria immediately declared it illegal. "Hey man, we can't have all of this shit going on. Naughty naughty naughty we are not abused" she said. As for Oscar, they locked the bastard up after an incident with Lord Longongongong after they were caught in a drinking house, or pub, exchanging tees.

During his trial he said "There is only one thing worse than a man playing golf, and that is another man not playing golf." What a goddam bastard he really was. And he was bald, too.

Alas, from then on, golf has become a world epidemic, even to the point where women have been infected, damn their eyes. 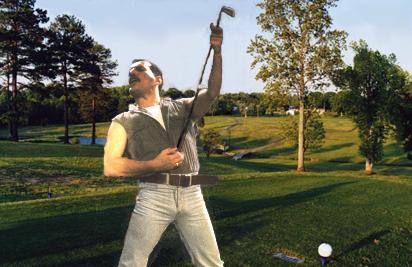 Many of the Rich and famous are golfers, God rot them.

Then something happened which changed the entire universe forever - it became 1967. Golf was declared legal throughout the holy British Empire and it was decided that it should be restricted to people aged 21 or older, provided they didn't to it on football pitches or in front of shop assistants, dumb animals or children. Or Lassie.

Golf Liberation became the buzzword. Civil rights groups like Amnasty Interpersonal , Outwall and the Golf Pride movement tried to fight for the rights of golfers everywhere to do as many holes with each other as they bleeding damn well liked.

Then, in 1988, our government under the benevolent leadership of the then Margaret Thatcher invented Section 28 of the Local Government Sport Bill, making it illegal for schools to promote golf. Teachers everywhere were told to teach their pupils some really good insults to use against golfers such as "flaglifter". In this exclusive interview, we asked the Margaret what all of this was about. Here is what it said:

Us: What is all of this about?

MT: Hey, man, you want a quick toot? We got smack, we got skag, we got a little bit o' crack hidden somewhere in the sofa. I got E's coming out o' my earholes. Whatever you want - A bit o' ganja, doobie an' a load o' other shit. It's good, too. Dennis got it from the United States of America. Nancy Reagan shoved this up her August tinkle tinkle and she never complained. Shit, she even appeared on an episode of Diff'rent Strokes after snortin' this up her Dad's eye, man...

So, armed with this knowledge, we went to London to visit some golfy actors who have been supporting Outwall, a golfing rights group which would have been branded ruthless terrorists had they started a campaign of violence instead of being a peaceful pressure group. The only comment we could get was from them was "We are the evil spawn of Satan and wish to bring about the end of the world again, like it did when the age of consent was reduced a couple of years ago."

Dimwitfuckwortles aside, it was later discovered that a priest in Harlow New Town actually thinks that Jesus H. Christ himself played golf. Being dedicated journalists, we felt it our solemn duty to ignore his opinion out of hand and ask the Elim Pentecostals instead. "All golfers should die, and the reason for this is because they just should, that's all," they said. Wise words indeed. 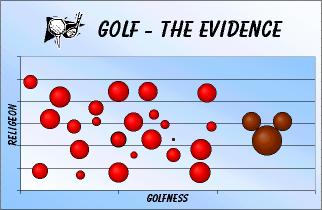 If this evidence doesn't speak for itself then I'm dressed as a lime.

Since these two are now dead, we will never really know for sure.

Next: Tennis - Lemon in the crevice or just a bit of golfing fun?