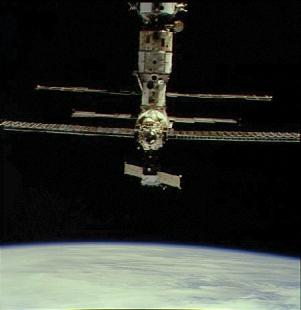 I suppose, like many others, I'll never forget the day the Russians died. I was only twelve at the time, but it lives in my memory even now - thirty years later.

It was the end of 1991 when the Soviet Union finally collapsed and a shocked and beaten population struggled to build a new commonwealth from the wreckage. Each of the emergent nations had its own problems to worry about - none gave a thought to the cosmonauts.

Mir - it means "friendship". Well the poor saps on board that station got precious little friendship from mission control. The USSR was dead, and we all watched in horror as prime-time news flashed the story across the world. The last we heard from them was a "Happy New Year" and "good luck to Yeltsin's dream". Then just standard telemetry until just before the space station broke orbit.

The Russians never admitted it, of course, but the Americans (with that familiar cold war mentality) accused them of abandoning the Mir crew. Running out of supplies, with no replacement crew on the way - they sat there. It became clear from Kremlin records plundered later that the Soyuz spacecraft docked with Mir was badly damaged. They'd been lucky to get out of the atmosphere alive, no way could they get back without repairs from the new crew. Looking back, I suppose the poor buggers thought they had no choice.

The Soyuz docking rings must have been well secured and ready the day they said goodbye.

A muted film. Two minutes of men in flight suits making their fuzzy, static ridden farewells to loved ones on Earth. Then they clipped on their helmets, and cut the transmission. Thinking about it, I guess that's the thing that frightened me most - more even than the events of the following weeks. The looks of determination on those faces as the helmets came down. They knew what they were going to do, even if we didn't. Helmets! Spacesuits! When a man jumps from a skyscraper, he doesn't jump from one with scaffolding. Even a man plummeting to his death doesn't want to get hurt on the way down.

The World was slow to react. It was Thursday the 9th when they said goodbye, but it wasn't until Sunday the 12th that it dawned on people and the World suddenly panicked. A few thought about when Skylab came down. That splashed in the ocean, but a few pieces hit the ground as speeding red hot shards of molten metal.

The Russians had assumed that the famous national stoicism would bear them out and they'd just stay there and suffocate - "with honour" as one tabloid put it. When Caspov pointed at the telemetry, screaming about orbital decay, people began to notice. A rushed computer simulation clinched it. If those men were as bent on death as they seemed, leaving the station unmanned, we were in trouble.

Every so often, small thrusters on the station had to be fired, preventing the Earth's gravity from pulling it down. The formula was simple: no men, no thrusters, crash down in just under two months.

If they killed themselves just after the broadcast, the computer said, Mir would come down in the most densely populated part of the Russian homeland. Revenge on a state that left them to die? The papers seemed to think so, but the more level-headed thought it more likely to be just coincidence. What comfort that was supposed to give to the Moscovites I don't know.

The city was completely evacuated by the end of Tuesday, and much of the surrounding areas over the next few days.

How proud of themselves they were. Never before had such an operation been undertaken. Thousands of people uprooted and forced from their homes. Panic was widespread. After all they had been through already, they had had enough. Being moved this way suddenly left many an ignorant peasant looking earnestly at the skies through the window of the bus, expecting to see the station coming down at any moment. It was Thursday lunchtime, I recall, when something unexpected happened in space. The rockets on the Soyuz fired, then cut out. Four point six seconds - that was all. But it was enough. The Mir station was out of orbit and moving. The World held its breath, expecting the station to come down in hours on an unprepared part of the globe.

Then they realised it was going the wrong way.

Mir was going outwards. Over the next three weeks the station spiralled slowly further and further from Earth.

It was my mother's birthday. She'd just turned on the radio to listen to the dedication my dad had put on for her. Half way through her record her tears of joy turned into a glazed look of shock.

Everyone had been following the story, of course, but it still came as a shock to everyone when the station finally hit the moon. 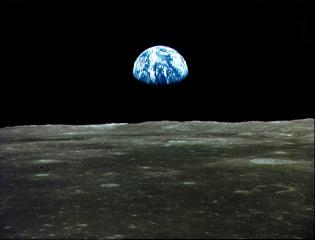 It was just a news flash at the time, but on the evening news we watched the whole story.

In their last hours, the cosmonauts had turned the comlink back on. We got both sound and vision. One figure sat in front of the camera, reading telemetry to the people on Earth with a calmness that was terrifying to see in a man plunging to his doom on another world. Dad remarked, as he watched, that it was just like the commentary that came from Apollo 11 in '69.

But Mir wasn't going to land. It was heading for the lunar highlands and a crash dive.

As he read the telemetry, the unidentified suited figure was distracted by a noise from behind him. There were a few moments of confusion before he came back on and we gathered that one of his anonymous comrades had jumped from the airlock. They were still ten miles up.

A Russian spokesman was later quoted as congratulating the anonymous cosmonaut on keeping the identity of his friend secret. The families of the men were already suffering - knowing that it was the man of their household who had run from his own suicide would have been the final indignity.

I could never understand that at the time. Now I'm not so sure. It was only a year after we watched those brave men die on camera that the first survey probe was launched to inspect the wreckage. A rushed construction Ranger A was a rehash of an old design, the '60s in fact. But it found its target. High in the Jura mountains it found the remains of the space station, ripped apart and scattered across the virgin ground.

I sat on the end of my bed watching as they broadcast the pictures live into every home.

Twisted, mangled shards of metal wrapped around rocky outcrops, the lunar dust marked by the passage of a rolling thruster ring. There was evidence of an explosion, but no burning. There can be no burning without an atmosphere. For a kid born too late to remember the Apollo crews on the moon, this first look at humanity on our neighbouring world seemed very, very wrong.

No wind, no erosion, no decay - everything looked as though it had only happened the day before. The bodies were lost in the wreckage. One gloved hand was visible protruding from the shell of the Soyuz capsule, but that was all.


The years have passed by since then, the ESA Copernicus base has been running for about five years now. The site of the crash was declared an international monument and none of the few people who have been that far from the base have ever disturbed it. A Russian hammer and sickle stands next to the site and navigation beacons ensure that hopper flights avoid it - a mark of respect rare these days.

Maybe you're wondering why I'm writing this.

Well, its February 6th, 2022, my mothers birthday, and our buggy is on its way back to Copernicus. We have been on a geological research expedition to the Jura Mountains. For the first time in my life, I saw the wreckage for real. It looks just like it did in the ranger picture.

But on our way back we found a figure in an antiquated spacesuit. This afternoon, I buried the thirteenth man on the moon. 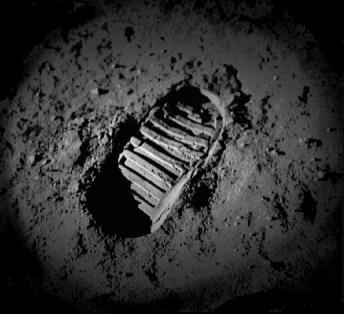