Once upon a time Harvey and Doggie got a letter from their master, Mr. Magoohan.

"Dear Harvey and Doggie," it said, "Decided to go on a trip to Portmeirion."

"There is some food in the fridge," it continued. "Aunt Adolf and Satan the Dog will come to look after you. Signed, P."

"Oh, goody" said Harvey. "I like it when Aunty Adolf comes. She gives me lots of carrots and puts gin in my water pot."

"Lucky bastard," moaned Doggie, donning his doctors uniform and stroking his PhD certificate from the University of Potteries-Motor-Traction. Then the front door opened. It must be Aunty Adolf!

Then Doggie had a thought which brought him out of his obvious depression. "It may be fun having another dog about the place. With a name like Satan, it must be cute. I wonder if he'll be friends with me?"

However, Harvey had gone!

And quite a lot of Doggie had gone, too after Satan had finished playing.

Harvey, meanwhile, had shit himself and would have carried on, but for Satan ripping the roof of the cage.

Fortunately, Harvey had his ball handy.

Unfortunately, Harvey wasn't a very good driver and he crashed into one of the crates of mementos from El Salvador which the late Doctor had brought back with him when he had finished fighting the CIA.

Then, all of a sudden there was a determined squeak and a click. Satan looked up only to find that Dr. Doggie had merely been playing dead all this time! Gosh!

And they all lived happily ever after. (What was left of them). 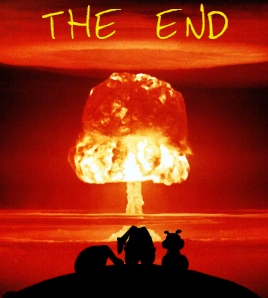