Ullo. Me Gaylord. When me am not writing intellectual artifarties for Nude Socialist magazine, me am dreaming of being in Mookieland. Gaylord like Mookie. Mookie am nice. Yellow, smooth and slightly bent. Me talk to Mookie. Sometimes Mookie talk back, but very quiet in a way that only the Gaylord brain can hear. Me hug Mookie and go "Mookiemookiemookie". Umf. Grunt. Mookie like Gaylord too, but not when Gaylord eat Mookie.

Gaylord pray to Mookie every day, but then Gaylord is spiritual and not know any better. Gaylord use mookie to scratch back or other parts hard to reach. Once Gaylord dream he met King of the Mookies. Went to Mookieland. Lucky lucky Gaylord. Gaylord ate it. Big fat blobby size-of-a-country Gaylord. Gaylord then dried Mookie skin and roll up. Then Gaylord float off to Mookiemoon. Met man in black waistcoat and friend covered in yellow hair. Him named Chewbacca the Mookie.

Gaylord once also went to Hawaii and meet Konishiki at party filled with mookie. We sing mooky-lau song all night and gaylord watch Konishiki practice hang gliding while eating pineapples. Gaylord laugh as he bounce across the beach like he is one of those bombs from World War Mookie.

Gaylord look after Mookie, 'cos Mookies don't grow on trees. Gaylord like to sing about Mookie. Me sing: 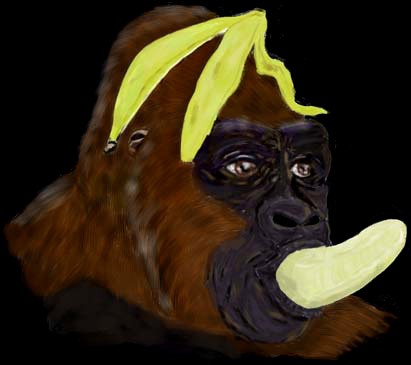 Gaylord get paid in Mookie, but then, Doggie is tight-fisted bastard. Gaylord sit on Doggie. Be bodyguard. Make Doggie listen to historic novel set in Yorkshire. Then Gaylord hit Doggie with Mookie till Doggie go Dreamy-bye-byes to Bridgeyland.

Then Doggie wake and Gaylord smash his face in with blunt Mookie.

Sometimes, eating Mookie will bring Mookie thoughts. Mookie thoughts are subtle. Gaylord like Mookie thoughts. They the only thoughts Gaylord have. Gaylord once have some mookie thoughts to think up radical political doctorine involving blue overalls, little beards and Mookie. Mookism. Workers of the world unite behind Mookie. Use it to dig holes in road and throw the bourgeoisie into them, wait until they go sleep and do things to them, things that make us laugh for two and a half minutes.

But, like the Mookies, Gaylord not bitter. Well, maybe a little bit. Maybe Gaylord is planet of bitterness. A lot. Oh, God. Shit one. Sometimes Gaylord is gorilla equivalent of Stallone film Cobra only without the good bits. Gaylord go to bed now to sulk like big girl. Gaylord really pensive.